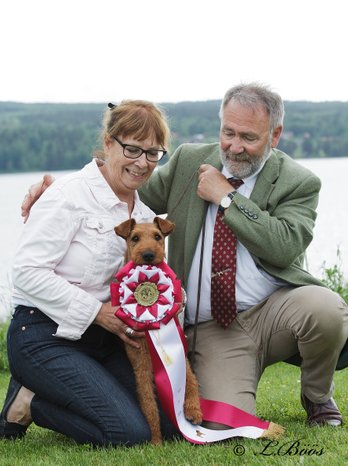 We have had Irish terriers since 1973, and had our first litter  in 1977. Since then, many puppies have been born in our home. Over 150 of these have earned the title Champion in Sweden, and  over 30 Champions in other countries.

Our ambition is to breed Irish terriers that are as close to the ideal breedstandard as possible, both mentaly and exterior. By that we meen happy, fearless, welthy and  go-ahead dogs that can be used to everything. Many of our dogs compete not only in dog-shows but are also successful in Agility, Obedience, Tracking and Rescue.

Since 2007 we also breed Jack Russell terrier, a happy and perky terrier, a bit smaller in size but with "as much content" as an Irish. It's a lot of dog in a conveniant size, 5-6 kg. We have imported our breed dogs from Australia, the country where the breed first was recognized and the standard was set in year 2000.

Gertrud is an authorized FCI judge and  assesses the whole Terriergroup plus Schnauzer, Pinscher och Tax, and also some breeds in group 9 i e Chihuahua, Griffon Belge, Brabancon och Bruxellois.